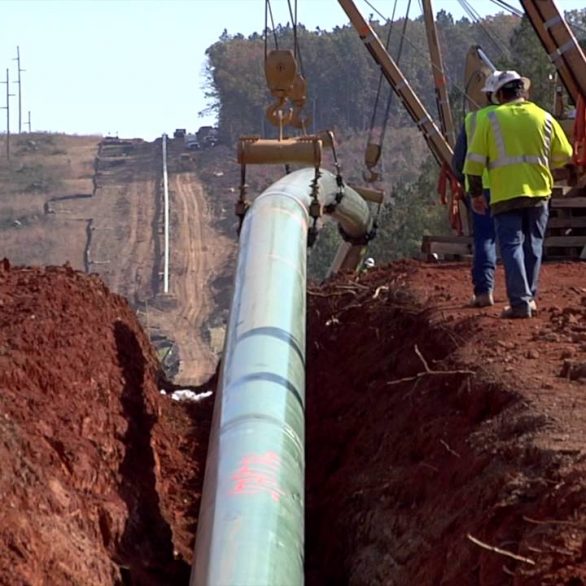 Will Virginians Be Able To Stop The Atlantic Coast Pipeline?

This week, the U.S. Supreme Court announced it will consider Dominion Energy’s much-delayed bid to construct the Atlantic Coast Pipeline, a 600-mile, $7.5 billion project that would carry natural gas from West Virginia to the East Coast. At the heart of the case is a request from Dominion to run its pipeline across the federally protected Appalachian Trail. In 2018, the U.S. Forest Service granted Dominion permission to cross the trail, but later that year, a lower court overturned the permit. If the Supreme Court decides the Forest Service acted within its jurisdiction, Dominion will be allowed to continue construction of its pipeline.

Dominion Energy praised the court’s decision to hear the case, saying it now sees “a clear path forward to resolve this important issue.” The Trump administration has backed the energy giant’s efforts.

Backers of projects like the pipeline frame this as a chance to get the government out of the way of private industry operating for a public good (energy independence). But for people in central Virginia, the push for a pipeline is a story of government interference, part of a century of struggle between government authorities and vulnerable populations that have been displaced from the land.

One of the largest land seizures in the history of the state took place in the same forest that Dominion now contests. In the late 1920s and early 1930s, the state of Virginia used eminent domain – which allows the government, or private companies in conjunction with the government, to seize land, compensate the owner and then use that land to benefit the public good – to acquire 190,000 acres in the Blue Ridge Mountains.

Promising public good in the form of wilderness protection and tourism revenue, the state seized or condemned the homes and farms of about 465 families in rural Appalachia. Two thousand people were removed from land they had tended for generations. The state donated the forest to the federal government, and in 1936, the government opened Shenandoah National Park.

The families forced out of their homes didn’t go quietly. In 1935, a farmer named Melancthon Cliser was dragged out of his kitchen in handcuffs. Cliser sang “The Star-Spangled Banner” as he was carried off, voicing his belief that such evictions were un-American and violated the Constitution. Young men from the Civilian Conservation Corps, the New Deal work relief program, cleared the property and left the Cliser family’s belongings on the side of the road.

For the descendants of those homesteaders pushed out of the hills, the sting of eviction still lingers. Lisa Custalow’s mother was born in the park and then evicted as a child. Custalow told the Richmond Times-Dispatch in 2017 that when she asked her mother about the eviction, “she would become quiet. She would have tears in her eyes, and she would say, ‘When the government tells you you have to go, you have to go.’ ”

Nor were these evictions limited to the wilderness areas of the state. Similar stories played out in central Virginia’s cities and towns. Charlottesville, home of the University of Virginia, was once home to a small but thriving community of African American residents and black-owned businesses, located just west of the central downtown. In the age of segregation, this neighborhood, called Vinegar Hill, became the center of black economic life and culture in the fast-growing city.

In 1964, in the name of “slum cleansing,” the city of Charlottesville destroyed the Vinegar Hill community, razing buildings and displacing residents. Twenty-nine businesses vanished in a cloud of brick dust. Five hundred people were forced to move into nearby public housing. For 20 years, Vinegar Hill sat derelict and unused. Today, only one original building from that time remains. Those blocks are now occupied by a parking lot, a Staples and a hotel.

As in the Shenandoah Valley, residents of Vinegar Hill recall helplessness and confusion at the demolition of their homes. “Before you know it, it was rubble, man,” said former Vinegar Hill resident William James of the neighborhood’s demolition.

The pipeline has sparked resistance from environmental groups, which have emphasized that construction would require a clear-cut path as wide as a football field to slice through the protected parkland. The Southern Environmental Law Center has argued that the project “threaten[s] people’s health, endangered species, iconic landscapes, and clean water.”

But the environmental arguments are entwined with the same anxieties over property rights and land use that have animated Virginians for decades. Urban and rural communities alike have their own collective memories of the encroachment of government-backed industry. Those memories are reflected in the diverse coalition that has come together to fight the pipeline.

In rural Buckingham County, a proposed compressor station threatens to disrupt life in a historically black community called Union Hill. Many residents of the neighborhood have spoken up against the project, including Ella Rose, whose property lies near the compressor station site. “This pipeline is intruding on our life and we’re not benefiting at all,” said Rose in a recent interview with Energy News. “I don’t want money and I don’t want to relocate. It’s heart-wrenching to know that everything of value I worked hard all my life for could be taken away.”

At the other end of the spectrum is Republican Rep. Denver Riggleman, Va., and his wife, Christine, who have become unlikely pipeline opponents since learning that the project would cut through their distillery in Afton, Virginia. In a 2015 documentary filmed by their daughter, Christine Riggleman lamented the prospect of turning their land over to Dominion. “It feels like we don’t own anything,” she said, holding back tears.

These comments from Rose and Riggleman reveal a surprising alignment of interests across traditional social, racial, economic and political boundaries. In Buckingham, Virginia, Baptists and yogis have joined to fight the pipeline.

That unusual coalition is up against powerful forces: the Trump administration, a big energy company and a Supreme Court dominated by conservative justices. But for more than a century, the people of central Virginia have been battling the government over their right to control their land, farms, parks and city neighborhoods. Whatever happens in the Supreme Court this term, they’ll keep fighting.