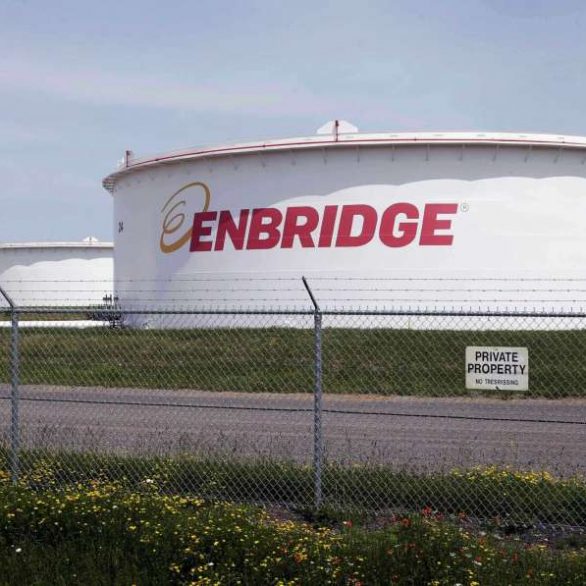 The Wisconsin Supreme Court has ruled in a Canadian firm’s favor in a dispute over whether Enbridge, Inc. should obtain special insurance in Dane County as part of a pipeline expansion. Supreme Court justices ruled 4 to 1 in favor of the company with Shirley Abrahamson and Rebecca Dallet abstaining.

As WPR has previously reported, Enbridge sought a conditional use permit (CUP) in 2014 to build a pump station in the county as part of its plans to expand the capacity of its Line 61 pipeline running from Superior to the Illinois border to up to 1.2 million barrels of oil per day. The county’s zoning and land regulation committee required the company to obtain $25 million in environmental impairment liability insurance as part of insurance conditions within the permit.

However, lawmakers slipped a last-minute measure into the 2015-2017 state budget to block counties from requiring special insurance if a pipeline operator already carries comprehensive liability insurance with sudden and accidental coverage.

The county ultimately retained the insurance conditions of its permit and Enbridge challenged the requirement in court. A Dane County judge ruled in the company’s favor, striking them from the permit. The county and a group of landowners appealed, and a three-judge panel ruled in their favor.

The Supreme Court’s ruling sided with the circuit court’s decision, saying the insurance conditions were unenforceable with the passage of the budget or Act 55.

The county and landowners fought for the insurance conditions in light of concerns stemming from Enbridge’s 2010 oil spill into Michigan’s Kalamazoo River. The cleanup cost the company more than $1.2 billion, and Enbridge’s insurer disputed some of the claims. The county and landowners wanted to prevent taxpayers from being on the hook for any potential spill, but Enbridge has maintained it would foot the bill.

In a dissenting opinion, Justice Ann Walsh Bradley said the majority erred in its interpretation of “sudden and accidental” language within the statute and what it means that a company “carries” the required insurance coverage.

“Accordingly, its determination that Enbridge ‘carries’ the requisite insurance to trigger Act 55’s preemption provisions is in error,” she wrote. “As the court of appeals unanimously determined, Enbridge made no such showing.”

In a statement, Enbridge said it was pleased with the court’s decision to uphold the circuit court’s ruling to strike the insurance conditions from the CUP.

“The CUP continues to remain in effect during this appeal, and normal operations at the Waterloo Station, which is fully constructed, continue,” wrote Enbridge. “The Waterloo pump station is critical infrastructure for the state of Wisconsin and for the region, helping to ensure a reliable source of energy for decades to come.”

“If every single municipality in Wisconsin — every city, town, village or county — had their own standards for this, it would be incredibly difficult, if not impossible, to comply with. That’s why it makes sense for the Legislature to establish statewide criteria for pipelines and that’s exactly what they did,” said Manley. “Unfortunately, Dane County chose to ignore those statewide restrictions and the Supreme Court decision today held them accountable for doing it.”

Dave Gault, assistant corporation counsel for Dane County, called the ruling the result of a badly conceived and worded statute that was tucked into the budget at the last minute.

“It says that local governments can’t impose additional insurance requirements if the pipeline operators carry comprehensive liability insurance with sudden and accidental coverage, but it doesn’t even set a dollar amount as to how much insurance is enough,” said Gault. “I’ve posed the question a couple times is five bucks enough? How much do they have to have to preempt local regulation?”

Gault said the only recourse the county and landowners have now is with the Legislature. He said the language in the law should be revisited and fixed because it’s problematic and vague. In the future, Gault said the next step for the county and its zoning committee may be to make a new request that Enbridge demonstrate the insurance it’s carrying.

“I think we should at least take them up on their offer to let them provide proof of what they have,” he said.

Madison attorney Patricia Hammel, who represented landowners in the case, said the court’s decision shows it’s being led by the state’s business interests.

“We now have no way of knowing whether Enbridge has pollution insurance, because the court has read that requirement out of state law, and no one has seen their insurance policies,” said Hammel in a statement. “We mourn the loss of an independent Supreme Court in Wisconsin.”

Peter Anderson with the climate action group 350 Madison agreed the ruling was an example of a corrupt court.

“This is a blatantly political decision and a payoff to large corporations at the expense of taxpayers of this state who can no longer be ensured that the cleanup costs and the kinds of accidents that Enbridge is notorious for, won’t be laid on them to bail out this company,” Anderson said.

As the globe shifts away from fossil fuels, Anderson doubted whether Enbridge would have the financial resources to pay for cleanup costs from any potential spill.

Wisconsin Public Radio can be heard in the Twin Ports at 91.3 FM or online at wpr.org/news.