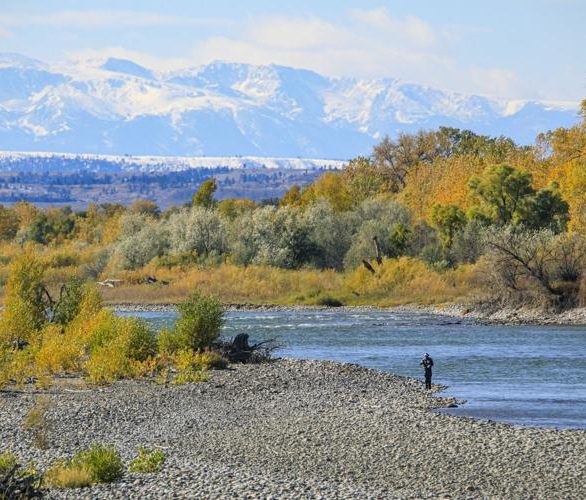 NorthWestern Energy’s plans to build a natural gas pipeline beneath the Yellowstone River were allowed to move forward on Tuesday after Yellowstone County commissioners voted to deny an appeal against the project.

The appeal was filed last month by residents who live along the south side of the Yellowstone River near Laurel where the pipeline will be drilled. The pipeline eventually will feed gas to NorthWestern’s proposed gas-fired power plant on the north bank of the river, roughly a half-mile downstream from the CHS refinery.

“This is a terrible location for a pipeline,” said Jenny Harbine, an attorney representing the landowners along the river. “The stakes are too high to rush this permit through.”

In fact, it’s NorthWestern’s second choice for a location; the first was to run underneath Riverside Park in Laurel and was abandoned by NorthWestern after it failed to get the requisite votes from the Laurel City Council.

Commissioners sympathized with the area’s landowners but said they found no grounds for appeal. The permit process was followed and the various state agencies with a stake in the project, along with the Army Corps of Engineers, all approved.

“I do not see the evidence,” said Commissioner John Ostlund. “I believe that our floodplain administrator has done his job.”

In their appeal, neighbors said the county’s floodplain administrator, Tim Miller, inexplicably reclassified the pipeline location out of the floodway and granted the permit. The entry point from which crews began boring a deep pipeline route beneath the river is 175 feet from Yellowstone’s south bank and well within the flood zone.

Miller explained that a floodplain includes both a floodway and a flood fringe and that the requirements for a permit allowing the drilling and installing of a pipeline there were all met by NorthWestern.

He said he definitely understands the concerns expressed by the neighbors, but those concerns fall outside what’s required within the permitting process.

“The application was found to be in compliance,” he said.

The appeal hearing on Tuesday lasted three hours and heard public comments from over 30 people.

Representatives from the Billings Chamber of Commerce and Big Sky Economic Development, along with labor union representatives, spoke about the importance of NorthWestern’s project to the region’s energy-based economy.

But the vast majority of comments were from neighbors and Laurel residents who expressed concerns about the dangers surrounding the project: accelerated erosion around the drill site and the possibility of an exposed and ruptured pipeline should the Yellowstone reach flood stage sometime in the future.

NorthWestern Energy wants to bury the risks of the project as deep as the pipeline, they said.

Craig Smith, an engineer with NorthWestern told commissioners the pipeline will enter the floodplain at a depth of four feet and reach a depth of 31 feet below the river bank, and then hit 50 feet below the main channel of the river.

“NorthWestern Energy is not going to let this erode,” he said.

The company’s vice president of transmission, Mike Cashell, told commissioners safety is NorthWestern’s greatest concern along with protecting the environment.

“We are true stewards of the environment,” he said.

Neighbors balked, pointing as an example to the malfunction at NorthWestern’s Hebgen Dam that left the Madison River without water in late November, killing scores of fish.

Blades told commissioners that the fears of neighbors aren’t unreasonable. Blades lives off Thiel Road and said that in the last 13 years, she’s been evacuated from her home twice after a pipeline ruptured in the Yellowstone.

Tom Riter, who also lives in the area, said they’ve experienced a 100-year flood twice in the last five years.

Resident Kara Ronin said of all the requirements for the floodplain permit, nothing is included to address an accident with the pipeline.

“What happens when something goes wrong,” she asked.

Following the meeting, resident Barb Emineth said she was disappointed with the outcome but not surprised. Residents are genuinely concerned about their safety, the health of the river, and the environment that surrounds it, she said.

If the county’s floodplain permit process doesn’t account for those concerns, it might be time to update the permit process, she added.